Lighting and cinematography for VidSync data

Working with video means some basic principles of the arts are required for our science. To get the highest-quality data, we need to understand what conditions and settings transfer the most useful information from the scene to the recorded video frame.

For video analysis of large, obvious objects, such as the presence or lengths of fish, almost any footage will suffice. However, for analyses of the fine details of behavior (tasks like seeing whether the fish opened its mouth to ingest a possible prey item, or trying to identify individual fish based on their markings) the quality of the video can make or break your data, and that depends heavily on the lighting on the scene.

First, the light must be adequately bright. Dim lighting forces the camera to use either a slower shutter speed, which increases motion blur, or a higher light sensitivity (ISO), which increases the graininess of the image. The presence of very bright and very dim areas in the same scene forces the camera to expose for one or the other, thereby either overexposing highlights or underexposing shadows.

If you're placing stationary cameras, remember to think not just about the current lighting when you place them, but also the way it will change with the position of the sun throughout your filming.

The characteristics of the light also matter. Two types of lighting work best for fine detail:

1) Diffuse lighting that evenly illuminates the entire scene. This is most common on brightly overcast days, when the sun's light is scattering through the clouds and coming evenly from all directions in the sky. It's also suitable to work in the shadow of a large object during a sunny day, with your subjects lit by the bright blue sky. In contrast, filming in a dark crevice of some gnarly habitat with very little sky exposure and no direct sunlight might produce footage unusable for detailed analysis.

2) Direct sunlight shining into the water through a flat surface from a good angle. A good angle means the sun is not out in front of the cameras but somewhere behind them or, at worst, to the side. Refraction from a wavy surface into shallow water can cast rapidly undulating waves of bright and dim lighting all over the subjects. This makes for pretty footage, but the constant variation in lighting can make analysis more difficult, as in the scene below. 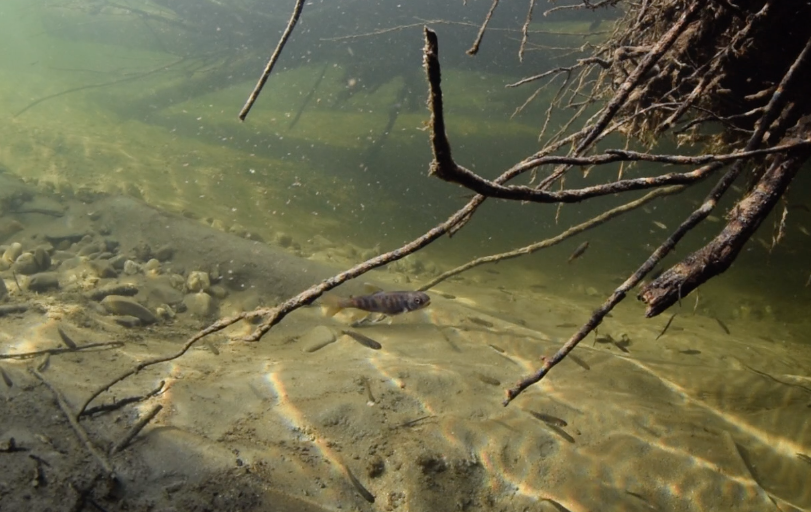 A secondary concern worth considering is the visual contrast of the background behind the fish. Often it's necessary to ignore this in favor of other practical concerns like lighting. However, given a choice, it's useful to have a fairly uniform background behind the fish, such as a large expanse of empty water. For example, in my own studies of juvenile Chinook salmon around logjams in Alaska, I tried to avoid filming fish with a dense mat of roots and leaves directly behind them. Instead, I would try to point the cameras with the open water of the main channel as the background, or toward some dark recess of the logjam where I had brightly lit foreground fish contrasting against a dark background.