VidSync is in use worldwide by researchers who have generated several theses, dissertations, and peer-reviewed publications. Freshwater and saltwater researchers have studied the behavior of everything from tiny juvenile stream fish to adult whale sharks, basic length measurements, fish assemblages and biodiversity, impacts of bottom trawling, and predator-prey interactions.

This page describes a few of these projects.


VidSync was developed during Jason Neuswanger's Ph.D. work on the behavioral ecology of juvenile Chinook salmon in the Chena River, Alaska. His completed dissertation from the University of Alaska Fairbanks describes the project in detail. Chapter 2 on the effects of debris on drift-feeding fishes was published in Environmental Biology of Fishes in 2014, and the other chapters are at various stages in the peer review process.


Chinook salmon (Oncorhynchus tshawytscha) are critical to subsistence and commerce in the Yukon River basin, but several recent years of low abundance have forced devastating fishery closures and raised urgent questions about causes of the decline. The Chena River subpopulation in interior Alaska has experienced a decline similar to that of the broader population. To evaluate possible factors affecting Chena River Chinook salmon productivity, I analyzed both population data and the behavior of individual fish during the summer they spend as fry drift feeding in the river. Using a stereo pair of high definition video cameras, I recorded the fine-scale behavior of schools of juvenile Chinook salmon associated with woody debris along the margins of the Chena River. I developed a software program called VidSync that recorded 3-D measurements with sub-millimeter accuracy and provided a streamlined workflow for the measurement of several thousand 3-D points of behavioral data (Chapter 1). Juvenile Chinook salmon spent 91% of their foraging attempts investigating and rejecting debris rather than capturing prey, which affects their energy intake rate and makes foraging attempt rate an unreliable indicator of foraging success (Chapter 2). Even though Chinook salmon were schooling, some were highly territorial within their 3-D school configurations, and many others maintained exclusive space-use behaviors consistent with the population regulatory effects of territoriality observed in other salmonids (Chapter 3). Finally, a twenty-year population time series from the Chena River and neighboring Salcha River contained evidence for negative density dependence and a strong negative effect of sustained high summer stream discharge on productivity (Chapter 4). The observed territoriality may explain the population’s density dependence, and the effect of debris on foraging efficiency represents one of many potential mechanisms behind the negative effect of high stream discharge. In combination, these findings contribute to a statistically and mechanistically plausible explanation for the recent decline in Chena River Chinook salmon. If they are, in fact, major causes of the decline (other causes cannot be ruled out), then we can be tentatively hopeful that the population may be experiencing a natural lull in abundance from which a recovery is possible.

Most of the screenshots on the VidSync website are from this project, for example: 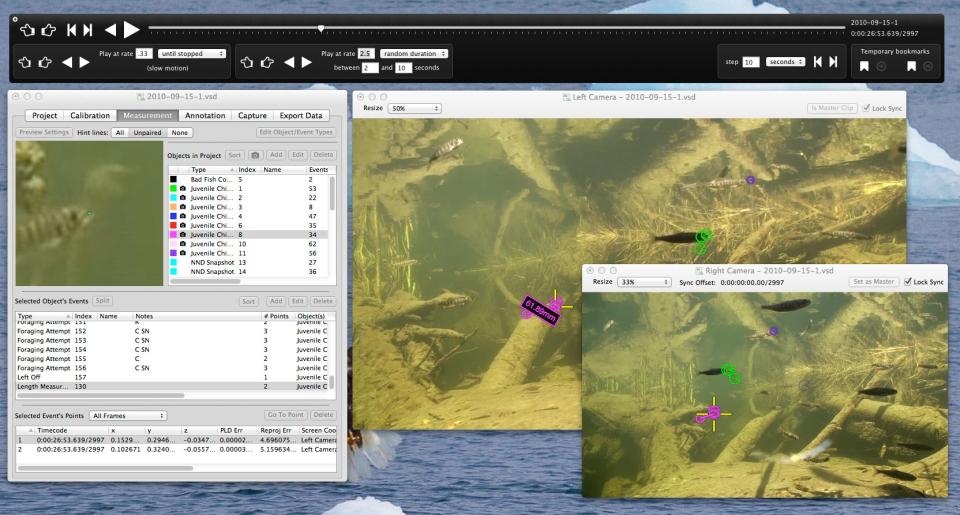 
Chapter 1 of this dissertation describes the mathematics behind VidSync and much of the information now on this website about how to use it. Chapter 2 applies VidSync to study the outcomes of prey capture attempts by these small fish, feeding on small prey, in flowing water — outcomes that would have been too difficult to discern using any other technology. It also uses 3-D measurements to test several common assumptions of drift-feeding models. Chapter 3 further explores VidSync's 3-D measurement capabilities to study a very novel form of territoriality. This would not have been possible without VidSync to streamline the collection of thousands of 3-D measurements of fish lengths, holding positions, feeding positions, and conflicts, as well as aspects of the environment such as water velocity. Chapter 4 uses the VidSync-derived behavioral results from Chapters 2 and 3 to help explain the dynamics of the entire population.


Through constant grazing herbivorous fishes play an important role in coral reef ecology by mediating competition between fast-growing algae and relatively slow-growing corals. In places where the long-term exploitation of herbivorous fishes has led to overgrowth of filamentous algae leading to the collapse of coral reef habitats, the rehabilitation potential largely depends on the reintroduction of herbivorous populations. Because of differences in feeding rates and preferences, herbivore diversity can be critical for maintaining the structure and function of coral reefs. Studying the biodiversity of fish assemblages in coral reef environments, therefore, renders crucial to assess ecosystem health and productivity. On the basis of remote underwater stereo-video footage recorded at the IUI in Eilat (Israel, Gulf of Aqaba) in March 2018 we will examine not only the community structure but also the feeding niche of Red Sea coral reef-dwelling fishes.


Species biomass will be calculated using recorded abundances, specimen length and length-weight-relationships from literature. Niche theory predicts that coexisting species minimise competition by evolving morphological or behavioural specialisations that allow them to spread out along resource axes such as space, diet, and temporal activity. These specialisations define how a species inter-acts with its environment and, by extension, determine its functional role. We will consequently use a functional group approach to evaluate fish community structuring. Groupings will be based on similar ecosystem functioning disregarding taxonomic relationships. By comparing aspects of feeding behaviour (bite location, bite rate, bite distance) in the most abundant species, we will examine their respective feeding niche within the herbivore guild. 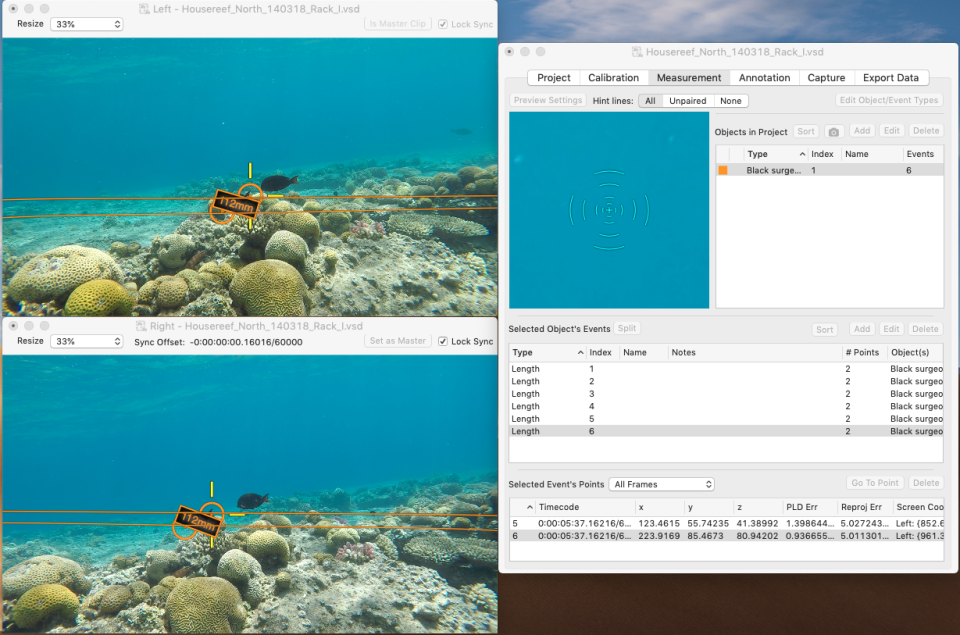 For more on this project, contact lead researcher Julian Lilkendey through ResearchGate.

This modern, non-invasive study aims to assess the margin of error between human visual census techniques and stereo videogrammetry analysis, and to accurately determine the size of free-swimming whale sharks (Rhincodon typus) in Bahia de la Paz, Mexico. The study will provide evidence that stereo videogrammetry techniques can greatly improve the accuracy, precision, and repeatability of measurements and generate a better understanding of the size frequency of resident individuals. Further analysis of historical data, including consecutive seasonal sightings with length estimates, combined with modern videogrammetric data will improve our understanding of growth and survival.

Vidsync is vital in the success of the project objectives, both for the calibration and design of the camera system and for the analysis of stereo measurements. A side-by-side stereo camera system was constructed using a titanium winglet frame mounted with two high-definition GoPro Hero 3 cameras. Continuous accuracy and precision tests using the VidSync software prove that stereo videogrammetry offers the highest level of technical performance even in such a challenging environment.

The below screenshot shows an earlier version of VidSync (before version 1.5) measuring the total length of a whale shark: 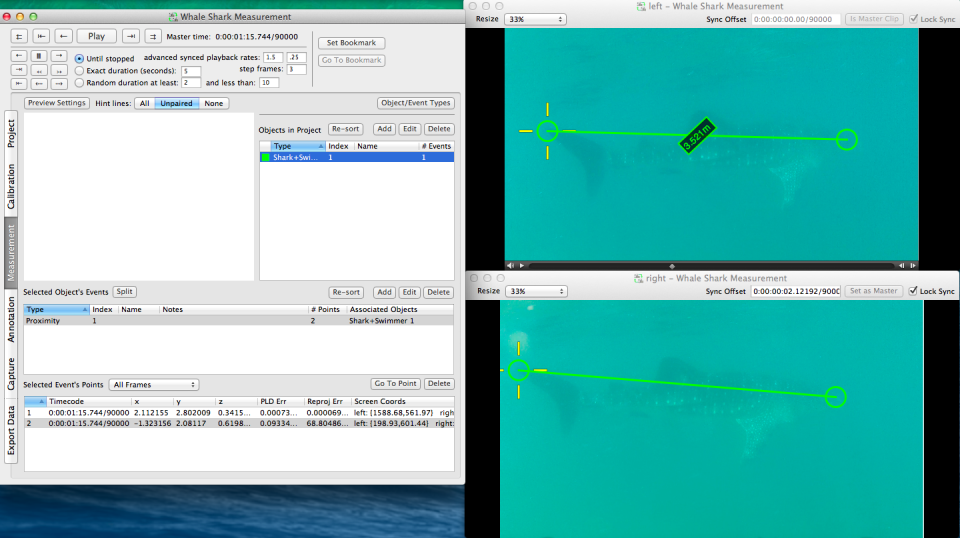 Studies on fish assemblages will be conducted in three forests of M. pyrifera similar (in terms of substrate, depth, size, distance from shore, etc.) in the Beagle Channel, Isla Grande de Tierra del Fuego. Surveys will be performed with a seasonal frequency during two years. These forests will be evaluated in two different stratums: at middle-upper position in the water column and at the bottom. Moreover, in order to compare fish assemblages in forest with freshwater proximity with fish assemblages associated to forest with distant freshwater input, a video stereo system will be placed in three kelp forest near to large freshwater inputs and in another three forests far from a freshwater input. In this case sampling will be performed only during the spring season when the salinity in the Beagle channel is lower due to the higher input of fresh water from rivers and streams (Torres et al. 2008) and therefore expect a higher contrast. There will also be seasonal measurements of environmental parameters such as salinity, temperature, transparency, etc.

In two stratum (middle-upper and bottom) of three M. pyrifera forests a baited stereo video system compose will be settled Go Pro Hero cameras, a support, one lintern and a bait will be settled. The recordings obtained will be analyzed with Vidsync in order to get parameters such as abundance, diversity and size of different fish species associated with M. pyrifera forest. In addition we intended to determine whether fish assemblages and/or species associated used differentially the two different kelp forest stratum: bottom (associated with holdfast) and middle-upper (associated with fronds) for food purposes and/or shelter.

The below images of VidSync in use on this project show an earlier VidSync interface (before version 1.5). 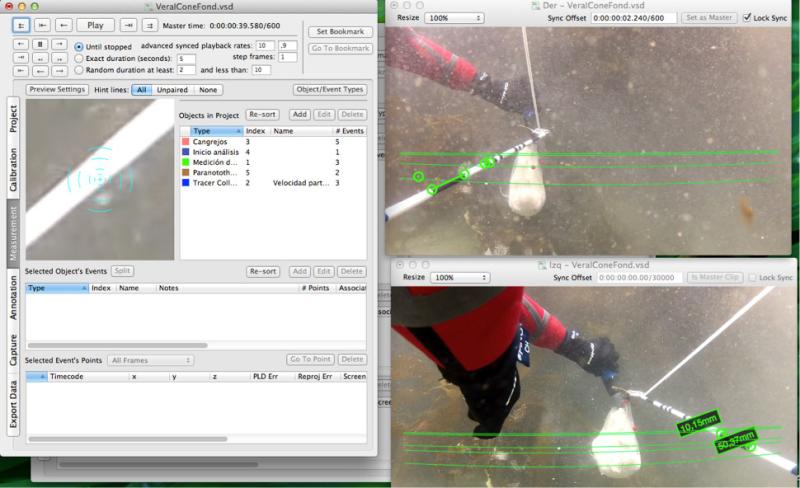 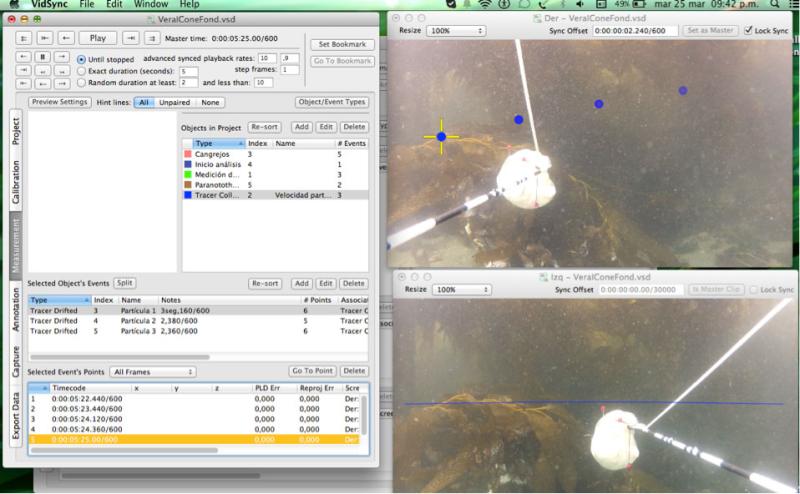 Measuring the standard length of a fish: 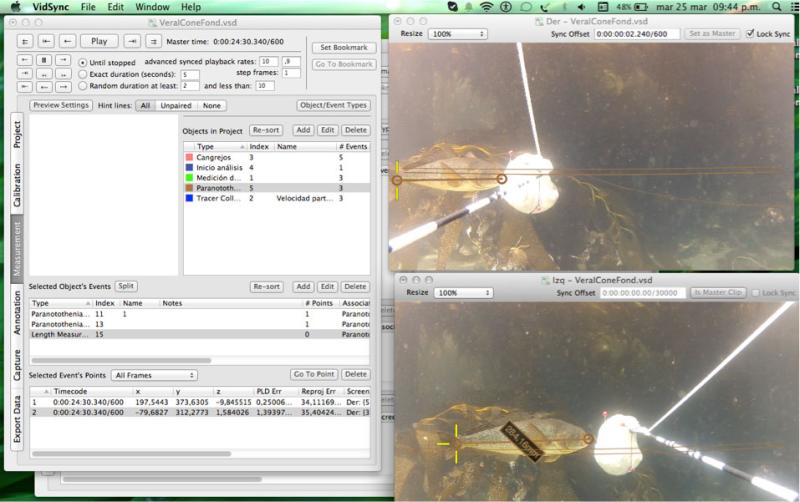 
This project is part of the doctoral research of Adriana Milena Cruz Jiménez under the guidance of Dr. Daniel Fernandez from Laboratorio de Ecología, Fisiología y Evolución in the “Centro Austral de Investigaciones Científcas” (CADIC)


If you have a VidSync project you'd like to have added to this page, please send the type of information shown for the projects above (brief description, lead researcher, institution, links to your lab/paper/project website, optionally a YouTube link, etc) to jasonneuswanger at gmail.com.